It’s so massive, people call it the “inland sea”. It stretches across four counties and took a full two years to fill. Lake Norman has over 500 miles of shoreline, and a surface area of 32,000 acres. When the lake began to fill it swallowed bridges, homes, mills, farms and churches, many still intact.

Constructed between 1959-1964 it’s the largest freshwater lake in North Carolina and is the power source for Charlotte and most of Mecklenburg county. Like most man made lakes, people assume that part of the planning and construction called for the various structures in the lakes path to be leveled and removed, but they would be wrong. fact many structures were not razed at all, but merely flooded over.

These include: historic homes, bridges, mills, camps, cemeteries, schools, stores and churches, along with ancient Native American sites and even a famous battleground from the Revolutionary War.

So let’s take a closer look at some the of history buried deep beneath the murky surface of Lake Norman.

The Long Island Mill and Village 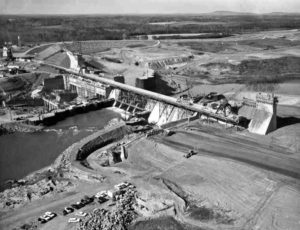 The Long Island Cotton Mill, operated by the Superior Yarn Mills company, closed on October 3, 1959 due to the formation of Lake Norman.

The lake overflowed onto both sides of the river, swallowing up both the mill and village homes of its workers.

With most portions of the mill constructed of stone and masonry, it was left fairly intact, as were the village church and many of the mill workers homes. The mill, village store, and many of the homes were already owned by Duke Power at the time plans were announced for the lake.

The East Monbo Mill and Village 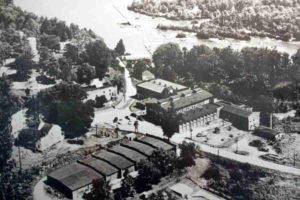 The East Monbo mill was built in 1907 by W. D. Turner, and entered into full production in the summer of 1910. As was the custom of those times, the mill provided homes to workers, who had the option to either purchase or rent them.

When notice came of the lake plans, people were compensated for the property, and given their home. However most could not afford to purchase new land and pay to have the home moved.

Some were able to trade their land for property that would become lake front. Parts of the mill and many of the homes remained and were flooded over as the lake filled to capacity.

Not everything beneath the surface of Lake Norman submerged in 1964. A decade after the creation of the lake, a plane sank in the summer of 1974.

According to the Charlotte Fire Department, a dive team was doing practice drills on the water and using sonar equipment, when they located the submerged plane in 2013.

The Charlotte Fire Department said the plane was found in 90 feet of water and is not visible from the surface. 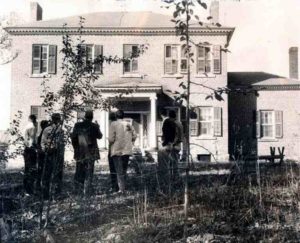 John D. Graham, the son of Revolutionary War hero Gen. Joseph Graham, built the Georgian-style plantation house known as Elm Wood in the 1820s in Catawba Springs, it was one of the grandest in the area.

In order to save the plantation house from being flooded the interior was first dismantled, carted off, and stored in a barn. But in 1961 there was a fire in the barn, and the home’s interior was destroyed.

The project was abandoned and the exterior shell of the plantation house now rests below the surface of Lake Norman. 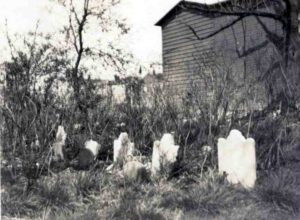 Everyone knows this great line from many a ghost story: “They moved the head stones but left the bodies”, in the case of Lake Norman its not a tall tale.

Duke Power moved multiple family cemeteries to make way for Lake Norman, however in some cases, and only after obtaining permission from family descendants, only the headstones were moved while the remains were not disturbed.

To inform the public about what it was doing, Duke Power published a 46-page document that indicates seven family cemeteries were moved, as well as a single grave. It does not go into detail on how many of those cemeteries elected to only move the headstones.

The original Highway 150 bridge linked Catawba and Iredell counties. The bridge was only partially demolished as the lake was being flooded.

The new Highway 150 bridge, which is 33 feet higher, sits approximately 100 feet north of where the old bridge once stood. 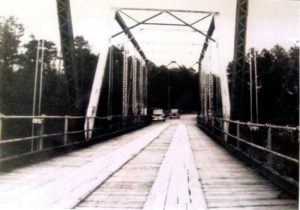 Beatties Ford Bridge was named for John Beatty, who according to historians, was the first white man to cross the Catawba River while following the trading path used by Native American tribes of the area.

The bridge was the main crossing over the Catawba River on Highway 73. It was only partially demolished to make way for the lake. Today, the bridge supports are present about 75 feet under the waters surface. 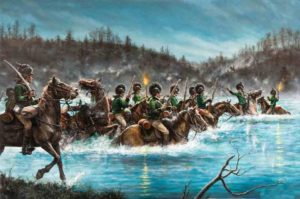 The site of the Battle of Cowan’s Ford is also under the waters of Lake Norman. In February of 1781, Lord Charles Cornwallis, in pursuit of Nathanael Green, engaged in a sharp fight at Cowan’s Ford on the Catawba River. 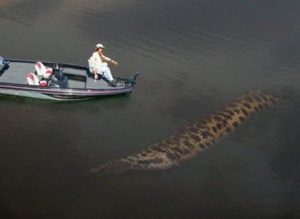 While not historical, Lake Norman is also home to “The Lake Norman Monster”, or simply “Normie”. Described as long and serpentine with scaly fins or flippers, this creature has been seen by dozens of witnesses: swimmers, fisherman, campers, water skiers and scuba divers.

Descriptions vary in color and size, but it seems people are definitely seeing something large and frightening in the lake.

There are several theories to explain the Lake Norman Monster phenomenon. Some believe the creature is none other than a catfish of gigantic proportions. Others think people are seeing a large fish called bowfin, alligators or possibly large salamanders known as hellbenders.

Previous article
Millennials Made Up Largest Share Of Homebuyers In 2017
Next article
Real Life Castles That Will Make You Wish You Were Royalty
Tags: